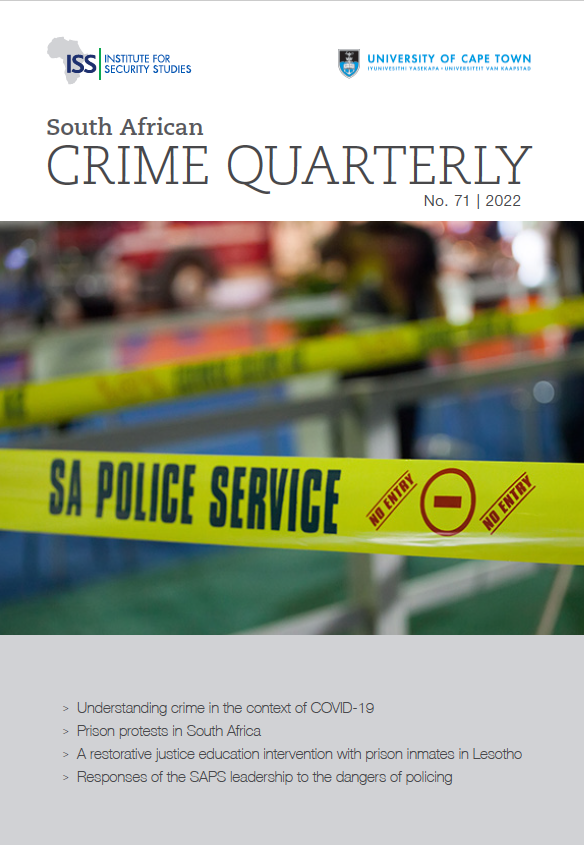 The 2022 edition of SACQ includes an article by Ivan Henrico, Nkosana Mayoyo and Babalwa Mtshawuthat examines crime trends in Saldanha Bay Municipality under Covid. Using hotspot analysis of the SAPS crime statistics between January 2017 to June 2020, the paper shows that crime increased over the period and that criminal activities are linked to urban hubs where most people stay and work. The paper also idenfies variations in variations in crime rates during the first three months of lockdown (from April 2020 to June 2020), and shows the differences between the five towns that are clusted under Saldanha Bay Municipality.

Lukas Muntingh explores the nature and causes of prisoner protests, looking at it first from a sociological perspective and second, a rights perspective. He discusses the tensions between prisoners' rights while incarcerated, and prison administration.  He argues that while prisoners have the right to protest, and can claim these rights, the enabling legislation is not only lacking but operational procedures prevent them from exercising these rights.

Ntholeng Molefi and Geoff Harris discuss the implementation and evaluation of a restorative justice education programme with prison inmates in Lesotho aimed at restoring their self-worth and dignity. The project demonstrates that the main challenges faced by ex-inmates include stigma, rejection by their families and communities and the harsh socio-economic environment. The articles shows that restorative justice education programming (translated into Sesotho and modified to suit local conditions) showed positive outcomes for the ex-inmates and their families.  In reflecting on these findings, the authors highlight reasons areas of caution in terms of claims of programme success.

Gráinne Perkins exmines how senior police officers encounter and understand danger experienced by SAPS members. Although, as office bound executives, senior SAPS members rarely encounter violence to the same extent as frontline officers, they are ultimately responsible for the strategies and operations employed to prevent police exposure to such dangers. She argues that a view of senior officials' perceptions of danger may also help us to understand why the SAPS police in the manner in which they do.

Pascal Richardson, Lu-Anne Swart, Rajen Govender and Mohamed Seedat investigate contextual and situational circumstances of protest events that record injurious outcomes for civilians and examine how these differ from protests which do not record such outcomes. Using the IRIS database, they found that protest-related injuries were more frequent during the late-2000s than the 2010–15 period; protest location was not a significant predictor of protest injury; protests which recorded arrests and damage to property were more likely to report injurious outcomes; and  the addition of an aggressive police response was significant in determining protestor injury outcomes. Their findings have implications for public policing strategies, highlighting the role of different modalities of police response in the mitigation or escalation of injuries at protest events.

Samuel Fikiri Cinini and Sazelo Mkhize examine xenophobic violence through the lens of strain theory, and explores possible solutions to combat violence against foreign nationals in South Africa. Based on interviews with foreign nationals living in KwaZulu-Natal, the findings suggest the need to address poverty, socioeconomic integration, community participation, and skills in order to reduce strain and build social cohesion.

Ropafadzo Maphosa analyses the Constitutional Court’s decision in Tshabalala v S; Ntuli v S 2020 2 SACR 38 CC, concluding that while the decision is undoubtedly a step in the right direction towards rape law reform in South Africa, questions can be raised about the court’s decision to extend the application of the common law doctrine to common law rape. The article argues that the court could have highlighted the power dynamics at play during the commission of rape without denouncing instrumentality as a central element of the crime.