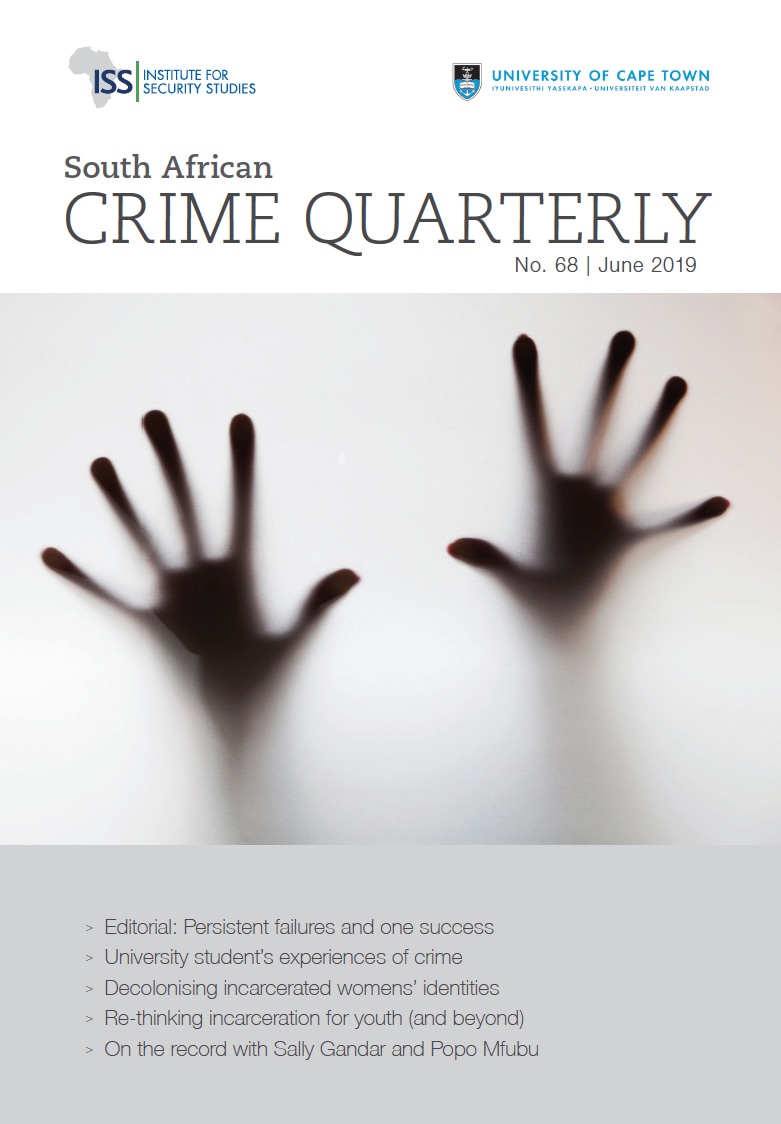 Eleanor Ross and Shahana Rasool examine the experience of crime among students at a large urban university in Gauteng. Using interview data, the article shows that, consistent with routine activity theory, the students appeared to be vulnerable targets, who were preyed on by motivated offenders under conditions of a lack of guardianship. As cognitive behavioural theory would predict, the incidents had profound psychological, financial and academic consequences for the students, who endeavoured to cope by adopting a variety of cognitive and behavioural strategies. The authors argue that the recommendations for enhancing guardianship on the part of university protection services and police, coupled with self-protection strategies on the part of students, can potentially reduce the risks of students becoming targets of criminal offenders.

Nontyatyambo Pearl Dastile and Biko Agozino highlight the fact that African women’s crime and incarceration has been predominantly understood using Western theoretical frameworks, thereby missing an important opportunity to develop an African centred epistemology on the topic. Based on interviews with 55 incarcerated women, the article argues that these women’s experiences of womanhood in the criminal justice system are shaped by race, gender and class which produce different forms of subjectivities and embodied selves. The authors show how the women do not have fixed identities given differences across race, ethnicity, class, religion, sexuality, nationality and (dis)ability, and how particularly racialised, gendered and class inequalities impact their identities, positions and their own modes of survival, as well as those of their children.

In their comment and analysis piece, Lisa Marqua-Harries, Grant Stewart and Venessa Padayachee argue that South Africa urgently needs to rethink crime and punishment, especially with youth. The crisis of the country’s high crime rates, recidivism and overburdened criminal justice system show that the time is right for a radical rethinking of the way we respond to the problem of crime and punishment, and the authors point out that simply ‘adopting a few well-meaning tweaks to a broken system’ falls well short of the kind of paradigm shift that is required. Instead, they argue that the system should be completely reformed into one that is trauma-informed, infused with an ethos of restorative justice, and that emphases community-owned interventions to respond to, and reduce the crime problem. The article presents a number of proposals and recommendations towards implementing a more effective criminal justice system based on these principles.

In ‘On the record’ Sally Gandar, the Head of Advocacy and Legal Advisor for the Scalabrini Centre, and Popo Mfubu, an attorney at the Refugee Rights Unit, talk to Kelley Moult about a recent judgment on refugee rights that was handed down by the Western Cape High Court on 19 June. The order, which was made after successful negotiations with the Department of Home Affairs (DHA/The Department) means that wives, husbands, children and other dependents of asylum-seekers and refugees are now able to document themselves in South Africa as ‘dependents’ of the principle asylum applicant in a process commonly known as ‘family-joining’, ensuring their rights to family unity and dignity in South Africa.