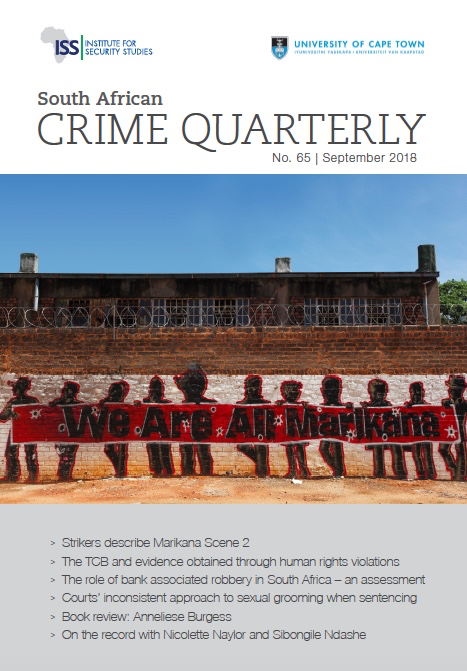 David Bruce analyses statements from the injured and arrested strikers from the Scene 2 massacre at Marikana, as well as the circumstances in which they were taken, to interrogate the assertion that strikers were shot by police while surrendering or injured. Bruce argues that, taken as a whole, the statements are a reliable source that suggest that some of the strikers at Scene 2 where indeed shot while surrendering.

Robert Doya Nanima extends the conversation on the latest version of the proposed Traditional Courts Bill, analyzing the admission of evidence obtained through human rights violations. Nanima finds that the Bill does not properly provide a satisfactory mechanism to evaluate evidence in criminal cases before it is admitted, and therefore doesn’t safeguard against over-zealous prosecution by the State and ensure human rights protections for accused persons.

Mahlongonolo Thobane and Johan Prinsloo discuss “bank associated robberies” – robberies (or attempted robberies) of cash that are committed against a bank client while en route to or from a bank or ATM. A relatively unknown phenomenon in public discourse on crime in South Africa, these robberies are of particular concern to the banking industry and criminal justice practitioners due to their violent, traumatic nature and dramatic increase that put the general public at risk. Thobane and Prinsloo argue that these crimes increase perceptions about the increasing levels, and violent nature of crime in South Africa which place a huge burden on the criminal justice system.

Nicole van Zyl considers whether evidence of sexual grooming influences the decisions of South African courts when passing sentence on offenders who have been found guilty of sexual assault or rape of children. The article argues that evidence of grooming should play a more important role in sentencing decisions, providing context in terms of the nature and impact of the crime that the court is asked to consider.

Elrena van der Spuy reviews Anneliese Burgess’s book, Heist! South Africa’s Cash-In-Transit  Epidemic Uncovered. She concludes that the book is ‘riveting and troubling reading’ that brings a ‘disciplined inquiry to a complex issue of organised criminality’that sheds light on the connections between the illicit and licit, and the interplay of structure and agency that enable this kind of criminality.

On the Record presents a conversation between Nicolette Naylor (Director, Ford Foundation for Southern Africa) and Sibongile Ndashe (Executive Director: The Initiative for Strategic Litigation in Africa) on the role of the law in responding to sexual harassment in the workplace.